Black Knight online slot with free bonus Console of Black Knight. Design of online slot machine is represented according to typical style of WMS. Producers provided user with an opportunity to choose modifications of control panel for setting game parameters.

Most Popular Slots in NJ

Journey back to days of yore, when the king and queen would hold court and brave knights would travel far and wide in their names. In the BlackKnight slot by WMS, we travel back to these times in this celebration of all things loyal and royal.

So does the Black Knight’s quest to entertain the legions of slot fans today bring success, or does the knight leave the battlefield bloodied, battered, and beaten into submission by the more modern and feature-packed competition?

Let’s take a look at how this brave knight performs.

If “Black Knight” sounds like this could be based on the famous scene in Monty Python and the Holy Grail, where the Black Knight is comprehensively defeated by King Arthur, with legs and arms removed but maintaining it’s “only a flesh wound!” then you are in for a disappointment.

Rather, it’s generically used here applies to anything vaguely royal and from medieval times.

The Knight himself is only seen on one reel (the wild symbol) although his symbol (the chess piece) is seen on other reels.

(Oddly, on the ring symbol, it is a white knight chess piece displayed. We couldn’t figure that one out either.)

Black Knight is a 5×3 reel, with 30 selectable paylines that are starting to look and feel a little dated.

That wouldn’t be a bad thing if it evoked the time the slot is set in, but no, it’s just relatively limited in its graphics and has arguably the most irritating accompaniment to a slot you could imagine.

Think about R2D2 beeps sped up, and you’ll be approaching the musical accompaniment.

One big positive though is how scalable it is to play in terms of wager. You can play for any amount of money per spin, from $0.01 up to $150, which means that you can play for the exact amount you want every spin.

Who will the Black Knight slot appeal to?

Medieval-themed slots are generally very popular and there are some fantastic examples of the genre at legal online gambling sites in NJ, but sadly Black Knight doesn’t really hit those heights.

It is appealing initially to a player who enjoys simple slot gaming, and the free spins feature is worth targeting, but the base game offers very little to keep you playing.

As such, the greatest appeal will be to a slot fan who enjoys being able to play for exact stakes and who likes to patiently work his or her way to free spins and be rewarded that way. It’s in that free spins round where 90 percent of the action occurs.

As I mentioned, the base game is unappealing, to be brutally honest.

The graphics are not high definition and look somewhat blurred and dated. The sound effects are, frankly, awful. And the base game wins are nothing you will get excited about, with most paying out at or below your initial wager.

However, it is not all bad news.

There’s no playing card low symbols this time, WMS has made all symbols on the reels linked in with the medieval theme, and there is the knight wild symbol on the reel that can help you create a winning payline.

There’s also a jackpot of 10,000 coins to be won in the base game alone, which is well worth a look.

The best thing about the slot however, is the free spins round, which is achieved when you land three of the Black Knight crest symbols on reels one, two, and three.

This gives you seven free spins, but with a sticky wilds feature in operation across all seven spins.

What this means is that when you land the Black Knight Wild on reels, two, three, or four, the knight will expand to cover the reel and remain in place for the duration of the remaining free spins. The more of these you can trigger earlier on in the free spins round, the greater your potential prize will be at the end of it.

Bigger wins are much more available during free spins, but you can’t retrigger free spins from within the round and it does take a good while to trigger the bonus from the base game.

This symbol can substitute for any other low or high symbol to create a winning payline in the base game, but can also turn an entire reel wild in the free spins round.

The sticky wild feature means that your seven free spins can produce a very sizable win if you are lucky enough to trigger them at the right point and with the right combination of symbols. 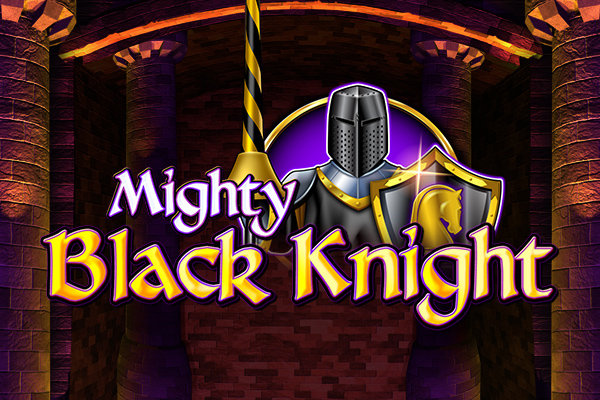 I’ve never played a slot that offers such a wealth of choices when it comes to how much you want to play for. Playing for exactly the amount you want on each spin is very easy.

The free spins round is what saves the Black Knight slot from being one of the also-rans. This feature alone makes the slot worth sticking with as you can win 50x to 200x your stake if you hit the right combinations.

The presentation on the slot is dated and the graphics look like they are taken from a 48-bit machine of the 1980s. The sound is somehow even worse.

If ever a slot needed botox and a facelift, it is this.

There’s no polite way of saying this, but the base game is dull. You simply spin the reels knowing your chances of a big win are very small, hoping that sooner or later you’ll trip free spins and then things will get interesting. 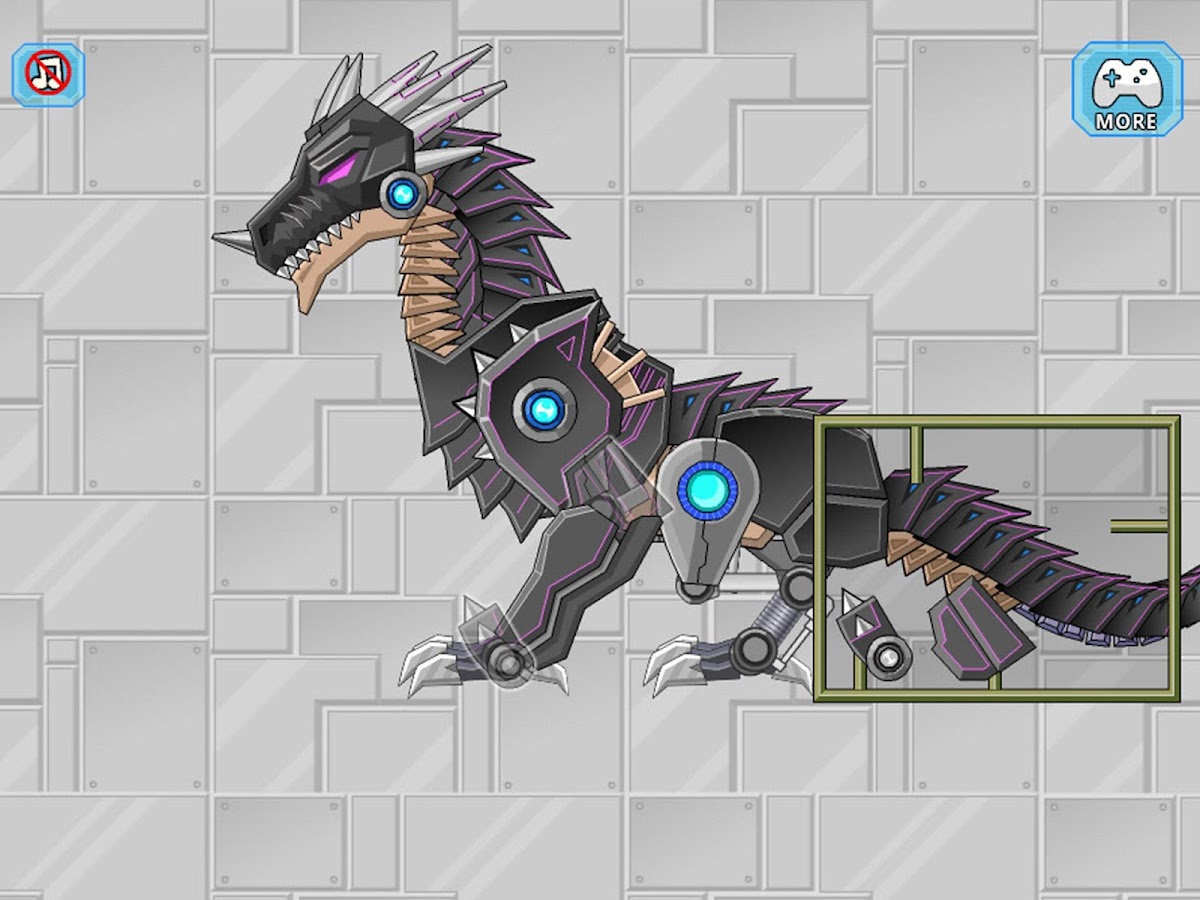 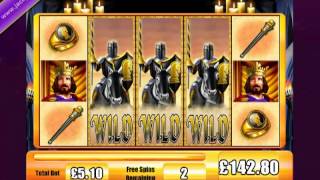 The free spins round is good, but hurt by the fact that you cannot retrigger from within the round. This means you know you are only going to get seven free spins before the base game reloads.

The less that’s said about these items the better. You can’t even say this looks like a “retro” slot, as it just looks old, tired, and dated, and the sound effects are so ill-fitting for a medieval theme. Imagine the Star Wars soundtrack over a film about King Arthur.

The base game would score ‘0’ here for offering little, but the game is rescued by a very enjoyable free spins round, which does make the slot worth playing and adds a little originality to the game with the sticky wilds feature, even if this one will never go down in the pantheon of best NJ online slots games. 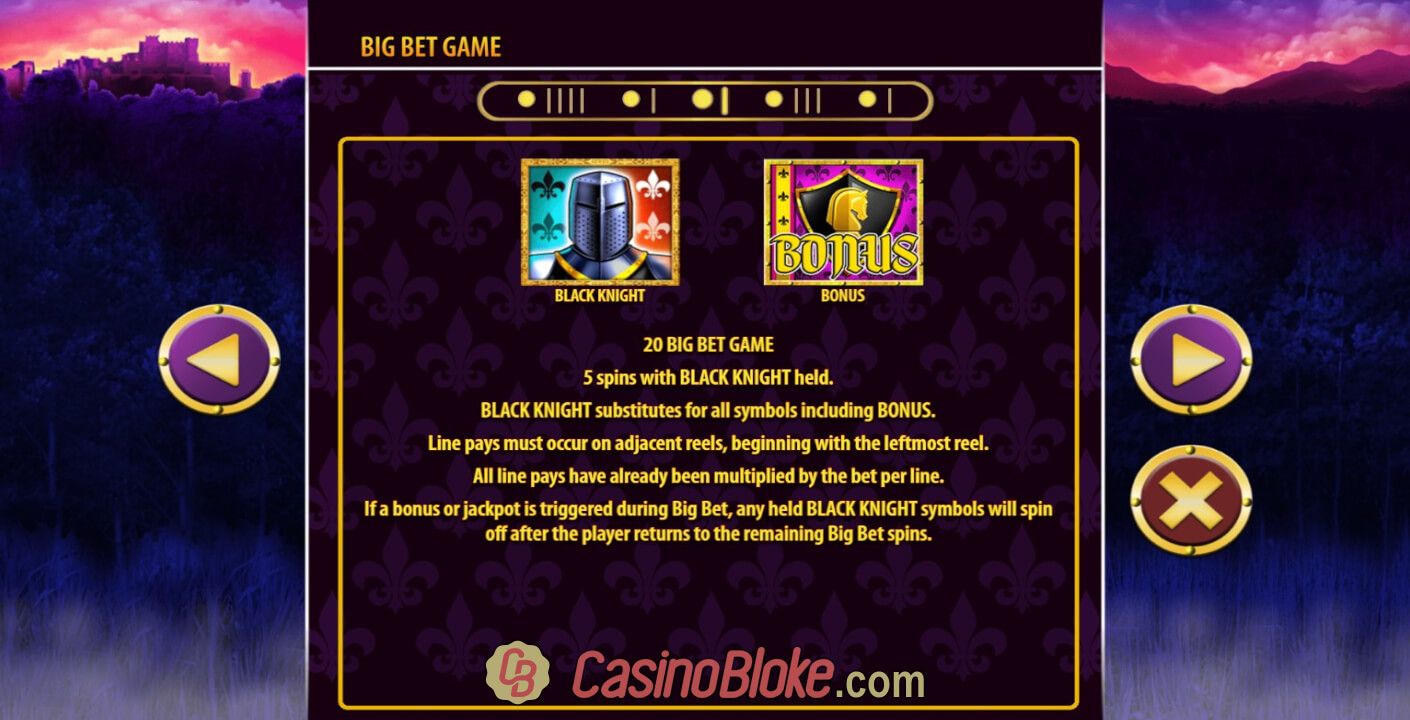 With a jackpot of 10,000 coins in the base game, plus more available in free spins, this is a slot that offers decent value in the bonus feature, but the base game tends to award smaller wins.

The base game can trigger the 10,000 coin jackpot, but it is the bonus free spins round that gives the game a little extra jackpot potential.

You may come back for the free spins game and the potential of a big win there, but there’s little else to keep you returning to Black Knight.

This Black Knight wouldn’t win any battle with any modern slot I’m afraid.

The good news is that its sequel, Black Knight II, is due for review soon. Let’s hope that the blunt sword is sharpened in the sequel; this Black Knight hasn’t got a lot going for him.