There were 29 players to start the day in Event #4: $1,500 Omaha Hi-Lo Split 8 or Better but at the end of the day it was Benjamin Zamani who was crowned the winner. At one point on Saturday he was multi-tabling, playing both Omaha and Event #8: $333 WSOP.com ONLINE No-Limit Hold’em. He busted the online event but was able to lock up his second WSOP gold bracelet in Event #4.

Several players dropped very quickly at the start of the day, bringing the field two tables within the first two levels. Two-time bracelet winner Marco Johnson was searching for his third bracelet but he was eliminated in 23rd place ($6,725) when Kevin Gerhart made a better two pair to send him to the rail. Also in the field today falling short was bracelet winner Jim Collopy, who fell in 17th ($8,246) when he could complete his flush draw to stay alive against Dustin Sitar. That left Zamani as the lone bracelet winner in the field.

Start-of-day chip leader Christopher Logue couldn’t make it through to the final table either. He remained steady for the better part of the day, but as the limits raised, and chips were exchanged, Logue’s aces were cracked by Jared Hemmingway and he was eliminated from the tournament in 11th place ($13,008).

James Chen, who had a roller coaster of a tournament was the final table bubble boy. Chen, who was near the top of the chip counts for most of the tournament, found himself as the short stack coming into the final 10. “I had more chips at the end of day 1 than I do now,” Chen said as the players were moving tables. He would be eliminated quickly at the unofficial final table by Alex Ferrari.

Hemingway took a hot start at the final table by eliminating both Dustin Sitar and Martin Corpuz. Hemingway found himself in big trouble against the two but caught running fives to scoop a massive pot. Out next was Scott Buller who ran into Ryan Paluf’s flush, eliminating him in 7th place ($28,948). Then Forrest Auel fell in 6th ($38,946) when Paluf caught a flush and Hemingway hit a better low and the two chopped up his stack. The table mostly quieted down after Auel’s Oregon-based rail left.

Hemingway and Gary Vick got a bit heated with each other over the course of the final table. Vick took offense to Hemingway’s aggressive betting procedure of slamming chips onto the table. The two batted heads several times which resulted in Vick dropping to the short stack and eventually being eliminated from the tournament in fifth place ($53,171)

With just four players left, Hemingway had a significant lead. Zamani trailed closely behind. Paluf dropped to the short stack when Zamani made a full house against him and moved into the chip lead. Paluf was eliminated in 4th place ($73,647) by Ferarri shortly after when Ferrari made a set against him.

Zamani moved into three-handed play with the chip lead and pulled even farther away by taking pots off both players. Zamani and Hemingway ended up chopping up the last of Ferrari’s chips when he was eliminated from the tournament in third place ($103,471).

Zamani cruised into the heads-up play with a huge chip lead and despite Hemingway’s efforts and several double ups, he was not able to overcome. Zamani made several wheels and applied pressure in all the right spots. In the end, Hemingway was left with just 20,000 chips and he was forced all in from the big blind. Zamani’s hand made two pair and a low and he locked up the tournament and the $238,620 first prize. Hemingway earned $147,428 for second. This is Zamani's second WSOP gold bracelet, putting him in the illustrious two-time bracelet winner’s club.

In a nine-hour battle that went into early Friday morning, Pat Lyons was able to deny Benjamin Zamani’s drive to a title in winning the World Poker Tour’s Legends of Poker at the Bicycle Casino in Bell Gardens, CA.

Lyons actually came to the felt with the second largest stack to start the day (4.98 million), behind only local favorite William Vo’s 5.26 million stack. Upeshka de Silva held down the third place slot at the start of the day’s action with 4.475 million, while Zamani was in a perfect stalking position with his 3.215 million in markers. Todd Peterson (1.93 million) and Rafael Ferreira de Oliveira (780,000) were the two players on watch for elimination as the cards went into the air on Thursday afternoon.

Oliveira, sitting on a stack that was utterly dominated by everyone else at the table, knew he had to strike quickly to get back in the game. He tried just that on Hand 7 when, after Zamani limped in and de Silva pounded in a raise, Oliveira came over the top with an all-in. Zamani got out of the way but de Silva called, showing 7♦ 6♦ to go against Oliveira’s pocket Jacks. The K-Q-10-6 flop and turn looked great for Oliveira’s double-up potential, but another six on the river ended those thoughts. Hitting his trips on the river, de Silva instead knocked off Oliveira, sending him back to Brazil with a sixth place payday ($85,760). 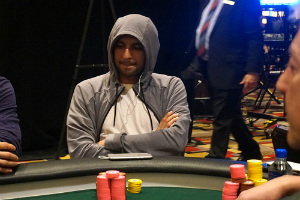 With everyone now quite settled with large stacks (even Peterson’s two million chips as the short stack represented 34 big blinds), it was thought that the players would just shuffle chips around and wait for the blinds to increase. That process, however, saw Vo bleed out his stack slowly as Lyons took over the lead on Hand 28 and drop under four million in chips by Hand 31. The most destructive hand for Vo came only seven hands later.

Peterson would lead from the cutoff with a raise and Vo, in the small blind, was faced with a difficult decision. As Lyons wasn’t at the table when the cards were finished dealing, his hand was dead and Vo was essentially the big blind. The deliberation led Vo to make the call and, after an 8-6-3 rainbow flop, Vo check-called another bet from Peterson. A second three on the turn brought another check-call from Vo but, on a deuce river, he suddenly came to life with a 1.4 million bet.

Now it was Peterson’s turn to be perplexed as he took his time in making the decision. After a good two minutes in the tank, Peterson decided to call and it proved to be the right move. Vo showed a 9-5 for complete air and Peterson, after turning up an A-8 off suit for two pair, took the more than 4.5 million pot down in sending Vo to the short stack.

Vo would never recover from that hand against Peterson. On Hand 45, with a J-8-3-Q-2 board showing and more than half his chips in the pot, Vo called a de Silva river all-in and showed Big Slick for Ace high. De Silva had hit from the start, his K-J flopping a second Jack, and gotten Vo to commit all his chips to the cause. After starting the day as the chip leader, Vo had to have some disappointment in finishing the tournament in fifth place.

De Silva took over the lead at this point, but Lyons was only about 300K in chips behind him while Peterson (4.51 million) and Zamani (1.84 million) brought up the rear. It would take the same number of hands (45) to eliminate the fourth place player as it had taken to eliminate the first two members of the final table but, once it came, it came in dramatic fashion. 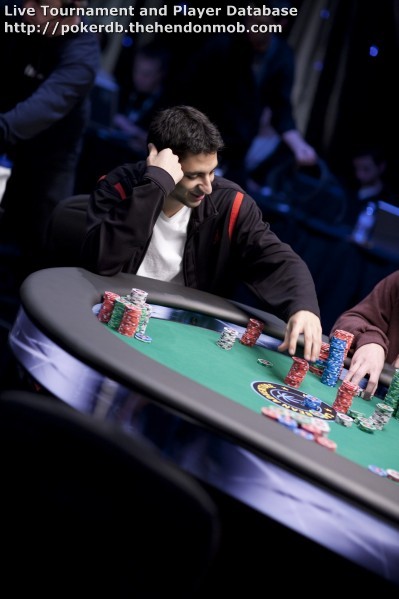 Under the gun, de Silva popped the betting to 250K and, on the button, Lyons took the action up to 850K. While Zamani had no interest from the small blind, Peterson did from the big blind. He would move all in and get de Silva to fold, but Lyons looked him up. Showing Big Chick (A-Q), de Silva was in a race with Lyons’ pocket tens and pulled a lady from the deck on a Q-7-4 flop. The five on the turn wasn’t helpful to anyone, but the ten was a dagger through Peterson’s heart. Giving Lyons a set on the river, the hand would go to the Californian as Peterson was sent from the final table in fourth place.

At this point, it looked like the eventual heads up match was going to be Lyons and de Silva:

But it was time for Zamani to shine. Making his second final table of the Season XV schedule, Zamani earned a double up through Lyons on Hand 106 and, on Hand 138, used flopped quad tens to double again through de Silva. Zamani would have liked to have completed the elimination of de Silva, but it was Lyons who would be the benefactor of de Silva’s chips, setting up what would be a battle between Lyons and Zamani.

Starting off heads up with almost a 2.5:1 lead, Lyons never let Zamani bring the two chip stacks closer together, but Zamani didn’t exactly roll over and let Lyons steamroll him. It would take an hour of play between the two gentlemen before, on Hand 201, Lyons moved all in and Zamani made the call. Both had picked up Aces, but Lyons’ eight kicker was bigger than Zamani’s deuce. The Aces didn’t come into play on the 9-9-7-J-10 board, but Lyons’ eight gave him a straight and the championship of the 2016 WPT Legends of Poker.