This particular craps strategy gets its name from the way you place your bets, because at any one time you should have 3 bets active on the table. The basis of the Three point molly craps strategy is using both the pass line and the come bet as part of your betting.

When it comes to craps bet patterns, it is important for players to be provided with the chance to learn both the “right” and the “wrong” side. After all, players need to be familiar with the rules and principles of playing both sides in order to take advantage of various trends, streaks and chances once such occur.

On the other hand, knowing the different aspects of playing both on the “right” and on the “wrong” side would offer craps players the opportunity to learn the different angles of the game, which would undoubtedly help them deal manage with the experience at every level possible. 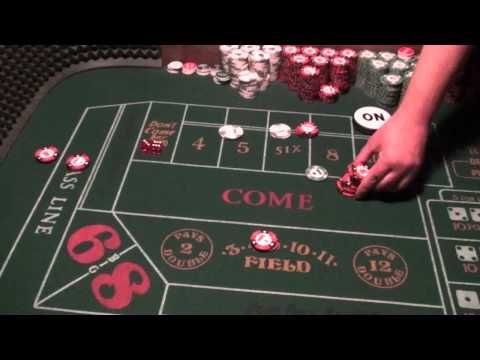 When the term “wrong” side betting is used, it is referred to the so-called Don't Pass bets, which could be exactly as profitable as the Pass Line betting. In addition, as long as craps players realize the fact that the Don't Side strategies are quite similar to the “right” side betting, it would be easier for them to understand these strategies.

Of course, statistical correctness is of paramount importance when it comes to bet patterns. So, in order to match the Pass Line bet pattern, we would provide players with three major Don't Pass bet patters, including a more conservative one, a more aggressive one, and strongly aggressive one. None of these patterns violate in any way the 3% rule.

The Don't Pass bet with Don't Come bet pattern is a conservative one. It provides players with the chance to feel safe while playing and at the same time ensures a nice profit while limiting their exposure to losses. First, the player needs to make their Don't Pass bet and once the point number has been established, they must lay full double odds against the point.

After that, a Don't Come bet should be made by the player in order for them to get one Don't Come number established. Once this is done, the player should lay double odds against the point number and stop betting. In other words, this pattern is exactly the opposite of the “right” side betting in which the player puts everything at risk to the 7. In this case, players could only lose one bet in case one of their numbers repeat. And if the 7 comes out, they win both their bets.

The two Don't numbers established provide players with security, as their exposure to risk is limited to two numbers that might repeat on any roll. In addition, this pattern considerably reduces the house edge to 0.6% or 0.8% in case they choose to lay only single odds.

In case that the Don't Come number actually is repeated, the player has the right to replace it with another Don't Come bet, which is also backed with double odds. What is important for players to remember is the fact that the Don't Come bet should not be replaced more than once. This would protect them against an eventual continuous roll of point numbers that repeat and lead to the player losing.

This type of “wrong” bet pattern is a bit more aggressive than the previous one as one more Don't Come bet is added to the previous one. This pattern offers the players the chance to have half of the point numbers covered. If they have managed to successfully establish all 3 Don't numbers and back them with double odds against the 7, the player would make a win on all bets.

As a matter of fact, casino customers should be aware of the fact that the wins generated on the “wrong” side are happening a bit slower, but are more steady when compared to the wins made on the “right” side that usually happens more quickly. Of course, players made the decision on which side to bet depending on their personal preferences, comfort level and experience.

As already mentioned above, all of these craps bet patterns correspond to the 3% rule never to make a bet that offers the casino a house edge larger than 3%. In other words, the closer the house edge gets to 3%, the less frequently should a player use such a pattern.

This betting pattern is considered as the most aggressive one of the three.

Of course, craps players should always remember that the house advantage jumps to 5.55% in case that the Field paid double on both 2 and 12, so they are not recommended to use it. However, this betting pattern could turn out effective in order for the player to draw profit at a time when the table is cold.

The pattern starts in a similar way to the previous one, meaning that the player is required to first make a Don't Pass bet, followed by 2 Don't Come Bets. In addition, Double odds should be laid on them all. But things do not stop here. On the come-out roll, the player should make a Field bet of the same size as their Don't Pass bet.

Once a point number is finally established, the Field bet must be pulled down. This provides the player with the chance to limit the frequency of using such a bet to the come-out rolls only. Statistically speaking, if a player participates in a typical run of between 5 and 12 rolls, they would be using the Field bet in only 10% to 20% of the time, which is pretty much manageable.

The player could have a strong start when outside numbers appear. On the other hand, when the 7 appears on the come-out roll, they would lose both bets. Of course, craps players should always remember to bet when the house advantage is limited to a reasonable level to prevent them from losing large bankrolls.

The “wrong” bet pattern is supposed to protect players against eventual substantial losses over a hot roll. Players, on the other hand, should always stick to the rule that if the point repeats, they should only replace it once. The same applies to the Don't Come numbers. If a Don't Come number repeats more than once, the player is recommended for the shooter to roll a 7 and then start over again.

Still, regardless of the fact that this betting pattern is considered the most aggressive one, it could provide players with a certain flexibility. If a Don't Come toss is lost over the gameplay, the craps player is allowed to replace it with a Lay bet against the numbers 4 or 10 instead of placing a Don't Come bet. Again, double odds are set against the 4 or 10.