Overview: Our charming Charming Frog Prince slot game takes inspiration from one of the most famous fairy tales. In this 5 reel, 9 payline slot you'll find two bonus games, wild and scatter symbols plus a loyalty feature.
See below for the information you need to play this game - as usual it's always 100% free to play this slot game.
Don't forget to login to save your score on the leaderboard. You could win $20 in our Friday newsletter Lucky Player of the week feature.

Welcome to Club World Casino, we have over 100 slot games to choose from, along with table, progressive, and specialty games. Stay one step ahead with 300% Bonus up to $3000 to play on the amazing Slots, Keno and Scratch Cards.

Land 3 of the Princess symbols on a payline to trigger the Frog Kiss Bonus game.
In this bonus feature you'll see 8 frogs waiting for a peck on the lips! Sure they all look the same but one of these frogs will turn into a Prince if you pick him!
You get 5 picks in total and if a frog doesn't turn into a Prince you'll at least reveal a star worth 20 points. The Prince is what you really want to reveal though as he's worth a cool 100 points ... and a big smooch!

Land 4 or more frog scatter symbols anywhere on the reels to trigger the Frog Kiss Bonus game.
In this game you'll see the symbols spinning. Act quick and click/tap on any of the frogs you see. The more frogs you can kiss during this bonus game the higher your bonus score will be at the end of the round.

On the top left of the game screen you'll see 3 hearts. Land 4 or 5 heart symbols on the reels to light up one heart. Light up all 3 hearts to win the loyalty bonus.

Wild Symbol: The Prince is Wild. He substitutes for all other symbols except the bonus scatter

Loyalty Symbol Land 4 or more hearts to light up a heart. Light up all 3 to win a 1000 jackpot.

Bonus Symbol: Land 3 on a payline to trigger the frog pick game.

Charming Frog Fact: There are approximately 4,810 known species of frogs
What type of shoes do frogs wear? Open toad sandals. 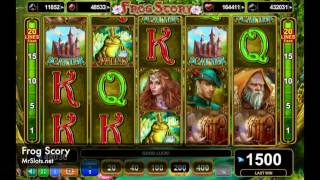 To those of you, who are familiar with the popular Brother Grimm’s fairy tale ‘The Frog Prince’, its online slot game adaptation Frog Story might prove to be a pleasant treat. Only instead of the frog turning into a prince, you will probably be expecting it to magically reveal a pot of gold and an appealing cash prize. Staying true to its traditional fantasy theme, this slot really does transport you into a land, where your bed time stories come to life. With a background that suggests you have entered the enchanted forest, the characteristic fairy tale symbols duplicate the atmosphere of mystery and romance. Though not something completely otherworldly, the graphics in Frog Story are quite satisfying and don’t give off the impression that more could be done to improve their quality. Perhaps the only disappointing aspect here would be the sound. There’s no soundtrack to add to the magical vibe and the audio effects that accompany each spin are rather scant.

The layout in this EGT is quite traditional, offering 5 reels and 3 rows. The symbols are your regular A, K, Q, J and 10. In addition, you have a number of themed symbols, such as the princess, the wizard, a hunter, old scrolls with potions and treasure chests. The wild symbol of the game is the frog and the scatter symbol is the enchanted castle. The game offers a total of 20 paylines. All of them are stationary, so you won’t be able to alter those to your preferences. However, you will be able to determine the amount of coins you place on each of them. You can choose from one, two, five, ten or twenty coins per each line.

What’s a bit different in the interface, though, is the fact that you won’t find a spin button. At the bottom of the screen you will see five ‘bet’ buttons, valued 10, 20, 40, 100 and 200. Click on the amount you wish to wager to spin the reels. The farthest icon to the right, right under your balance offers an auto play feature. Be sure to click on it to deactivate it once you’ve finished using it. Combinations of three or more of the same symbol ensure wins, as long as they start from the leftmost reel. And each winning combo triggers the Toppling reel feature. This means that the winning symbols will disappear and other fill fall into their place. To make it better, the Toppling reel can take place several times in a row, with each next time having an extra multiplier. In addition to this, the game also offers the tempting feature of gambling any of your wins. Thus, after winning, you can either continue spinning the reels, or you can click Gamble to multiply your prize. The Gamble feature will give you the option of guessing the color of the playing card. Guess right – and your amount will double, guess wrong – and you lose your bet.

Don’t expect to be dumbstruck with the unreal bonus rounds in this one. ETG tends to keep the bonus features of their games on a somewhat steady, basic level. That’s not to say that Frog Story completely lacks any special features. There is a fair share of extra aspects and we will start with the wild symbol. As we pointed out earlier, in this game this is the frog. While it won’t win you any payouts on its own, it will substitute missing basic symbols to make a winning combo. The castle represents the Scatter symbol and is definitely something you will want to look out for. It will bring you wins, regardless of where it is on the reels. Though lacking the customary freespins and other bonus features, Frog Story does offer a set of four jackpots. The jackpots are progressive and you can monitor them at the top of the screen, each of them marked with a different card suit. The amount in them increases as per the amounts that are deducted from your bets. You can expect a jackpot draw at any time in the game. Twelve playing cards will appear on the screen, of which you will need to start picking some randomly. When you get a match of three of the same suit, you will receive the corresponding jackpot.

All in all, the game has a good feel. The graphics are decent, and at times the developers even surprise you with some unexpected animations, like when the frog turns into a princess. Even though there aren’t any particularly exciting bonuses, this slot offers the opportunity for some good wins, and the gamble feature also spices up the gameplay a bit.