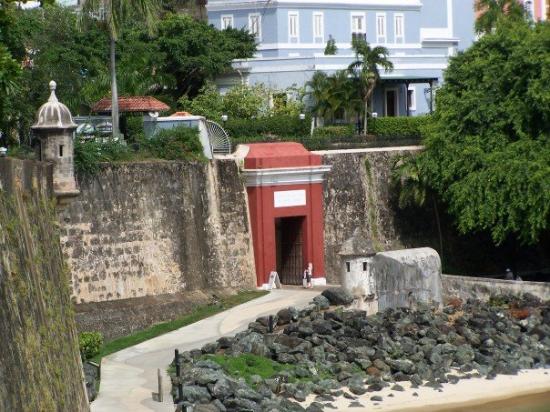 The San Juan Marriott Resort & Stellaris Casino is a hotel and casino located on the beach in Condado, San Juan, Puerto Rico. It is operated by Marriott International.

The hotel was designed by architects Osvaldo L. Toro and Miguel Ferrer and opened on October 4, 1963 as the Puerto Rico-Sheraton Hotel.[1] Directly on the beach in Condado, it boasted an Olympic-sized swimming pool.[2] Sheraton sold the property to the San Juan Dupont Plaza Corp. of Delaware[3] in 1979[4] and it was renamed the Dupont Plaza Hotel.[3]

On December 31, 1986, the Dupont Plaza was the site of the second deadliest hotel fire in U.S. history, started by disgruntled employees in the middle of a labor/salary dispute. The fire claimed 97 lives and caused 140 injuries. The San Juan Dupont Plaza Corp renovated the hotel in 1988, at a cost of $9 million, and renamed it the Palm Hotel and Casino. A reopening was announced for early 1989, but it was cancelled on December 19, 1988, when the Puerto Rican government refused to grant the hotel an operating permit, because the owners had only installed sprinklers in the hotel's first three floors, and not throughout the entire building.[5]

A massive federal trial over the fire began in San Juan on March 15, 1989. It was one of the largest personal damages trials in US history up to that point, with $1.7 billion sought by 2,300 plaintiffs from 250 defendants, including a maze of corporations and subsidiaries involved in the property's ownership.[6]AIG, a lead insurance underwriter supplying coverage for the blaze, ended up acquiring title to the shuttered hotel in June 1989, as part of the settlement of claims arising from the fire.[7]

Conceived to be unlike other oceanfront rooms in Condado, each reimagined space offers modern innovations, including IPTV and wireless charging lamps for smart devices. Work desks have been optimized for laptops, making them more spacious.

Involving 123 rooms and suites, this bold project beckons the return of hospitality in the beloved destination. The renovation is also inclusive of Gingambo, the resort’s signature restaurant, and the revitalization of the landscape design, pool deck and new sundeck area which creates a narrative authentic to the destination by curating a holistic outdoor experience.

Constructed by V ARCHITECTURE, the hotel is proud to maintain its local heritage, while adding contemporary renovations that enhance the guest experience.

Marriott Caribbean & Latin America Resorts represents the region’s most luxurious resort properties, each complete with chic accommodations, state-of-the-art amenities and stunning oceanfront locations. The Collection’s resorts situated throughout seven destinations in the Caribbean and Mexico share elevated standards of service, style and reputation that are further magnified by participation in the portfolio. Formed in 1997, the Collection brings a refined level of awareness to this exclusive group of full-service properties. For more information, please visit www.paradisebymarriott.com.