A touch of old school in Leicester Square

Napoleons is quite literally next door to the Empire Casino in London – probably not great news for them after they’d been trading for years and suddenly had one of the busiest casinos in the country open up within five yards. It’s a busy spot however, with plenty of Chinese punters in evidence.

Once you step through the doorway, it’s down a couple of flights of stairs with the reception area halfway. You don’t need to join or show ID if you don’t want to – although they seem to be trained to ask you to join, so if you’re not fussed, wander down to the floor.

Once you get to the floor, it’s a lot bigger than you think. They’ve done a pretty good job of making it bright and not dingy, with an awful lot of red in evidence, standard Chinese marketing tactics I guess.

First thing you see as you come in are some of the slots – in fact they hold the record as far as I have seen in having 8 bookie style “B2” games out of the 20 slots they are allowed to offer – obviously they must be very popular. I had a dart just to see how they went, and ended up taking a few quid out of one of the slot games called Temple of Treasure, a bit of an Indiana Jones ripoff, complete with hilarious similar-but-not-quite-the-same theme tune.

As you go further in there’s a cosy looking bar and large restaurant with a couple of different menus, one Chinese of course, and they have a couple of Punto Banco tables. The rest of the (very up to date) slots can be found along the wall as well. I thought I’d have a stab at the Blackjack here, although I got a bit cheesed off when the inspector would not stop talking to my dealer about his plans for his days off – a bit rude really, so I cashed out and moved on. I have to say that’s very much not typical of Napoleon’s in general, the service is usually excellent, but I have to call it as I see it.

This site certainly has its share of casino nutters too – you know, the guys who basically have no money but want to make friends with anyone and generally pass the time before they go back to barking at buses or talking to fruit or whatever, but they’re not too bothersome.

Overall I’d say it’s a really nice site – don’t be put off by the dungeon-like look of the entrance – it’s a good place to relax in Leicester Square for a pint and/or a punt. 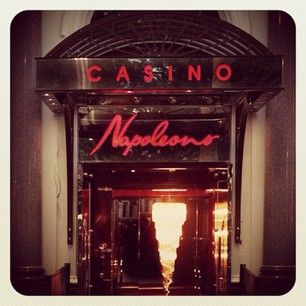 A & S Leisure own the Napoleons Casino and Restaurant Chain as well as a sports stadium, greyhound racing track and an Indian restaurant. The successful greyhound race stadium, next door to Napoleons Owlerton Casino holds 260 meetings a year on Tuesdays, Fridays and Saturdays. It attracts about 300,000 customers a year. The stadium has plans for a million plus pound refurbishment.

Napoleons have 6 casinos throughout the UK based in London, Leeds, Hull, Braford, and 2 in Sheffield – one in Owlerton and one in Ecclesall Road. They employ over 700 staff.

Chairman, Dave Allen, who up until recently was also the Club Chairman for football team Sheffield Wednesday, describes the ethos of the company as: “Commitment to professionalism, service and a relaxed atmosphere is our philosophy...'