— Alexandria Ocasio-Cortez (@Ocasio2018) August 28, 2018 Ocasio-Cortez is one of the many political figures—along with Sens. Bernie Sanders (I-Vt.), Elizabeth Warren (D-Mass.), and Jeff Markey (D-Mass.), as well as Rep. Luis Gutierrez (D-Ill.)—to urge Congress and the Trump administration to significantly step up relief efforts.

U.S. Rep. Alexandria Ocasio-Cortez, D-N.Y., appeared on MSNBC Friday to address the Green New Deal with host Chris Hayes and discussed the dire world she's convinced lies ahead for Americans if climate change is not addressed.

“So this issue is not just about our climate. First and foremost we need to save ourselves. Period. There will be no future for the Bronx. There will be no livable future for generations coming, for any part of this country in a way that is better than the lot that we have today if we don't address this issue urgently and on the scale of the problem,” said Ocasio-Cortez.

The freshman congresswoman believes America has seen dire situations before and mobilized, but mostly in connection with conflict and war. 'Historically speaking, we have mobilized our entire economy around war. But I thought to myself it doesn't have to be that way, especially when our greatest existential threat is climate change,” Ocasio-Cortez said. 'First and foremost we need to save ourselves. Period.'

“And so to get us out of this situation, to revamp our economy to create dignified jobs for working Americans, to guarantee health care and elevate our educational opportunities and attainment, we will have to mobilize our entire economy around saving ourselves and taking care of this planet.”

Ocasio-Cortez also addressed critics of the Green New Deal legislation she'd co-sponsored, after MSNBC played a montage of Republicans and pundits, including some on Fox News, criticizing her and talking about “cow farts” and accusing her of wanting to take away their “hamburgers.”

“I didn't expect them to make total fools of themselves,” Ocasio-Cortez said, saying she expected the criticism. 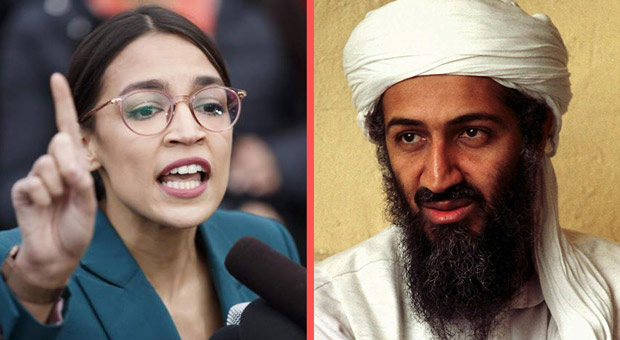 The congresswoman also said Hurricane Maria and the devastation caused on Puerto Rico was a sign that climate change problems are “here,” invoking the Sept. 11, 2001, terror attacks and criticizing the government for the lack of response.

“You know that this is here. This is not something that's coming. ... On the events of September 11 2001, thousands of Americans died in one of the largest terrorist attack on U.S. soil. And our national response -- whether we agree with that or not -- our national response was to go to war in one, then eventually two countries. Three thousand Americans died in Puerto Rico in the aftermath of Hurricane Maria. Where’s our response?” Ocasio-Cortez said to loud applause.

Tuesday on MSNBC’s “The Rachel Maddow Show,” Rep. Alexandria Ocasio-Cortez (D-NY) urged her colleagues on Capitol Hill to be more aggressive with the legislative process in responding to the coronavirus pandemic.

Ocasio-Cortez complained about what she maintained were inadequacies in the bill and likened the death toll to the Sept. 11, 2001 terror attacks in terms of the number of lives shed due to the pandemic.

“[T]his small bill, while something may be better than nothing — it is happening in the context of Congress having gone on recess for a month,” Ocasio-Cortez said. “We are going to pass a small-potatoes bill, and then we are talking about recessing again until May 4. And if we are going to bring every member or call back almost every member who can back to D.C. to pass a small incremental bill with the knowledge that we are not coming back until next month again, that’s two rent checks. And the last time we left, again, we lost over one 9/11’s worth of people due to this lack of action. And so we really need to acknowledge that this small bill — again, while something is better than nothing, and frankly, Democrats fought very, very hard to get basic things like testing. Republicans didn’t want to fund hospitals. They didn’t want to fund mass testing, which is what is going to allow us to reopen the economy.”

“I appreciate the stride that they made in that but ultimately in voting on the text of this bill knowing that we are abdicating our responsibility,” she continued. “We haven’t legislated for a month, and thousands of people are dying. Thousands of people are dying every day, and we’re talking about going back. And every time we pass one of these bills, we’re hearing the real solution is coming in the next bill, and the next bill and the next bill. At some point, we have to raise our hands and say, ‘When is the solution coming?’ Because two months of rent are going to pass by before we are entertaining a real bill. We’re talking about the scope of mass displacement in the United States of America.”