Want to play at the top live US poker rooms? If so, listen carefully because we’ve put together a list of venues that are recognized as America’s most impressive. Regardless of whether you’re interested in size, style, history or gaming options, our rundown of the best live USA poker rooms has got you covered.

However, the seaside resort town has long maintained its status as the home of poker on the East Coast. Casinos became legal in the late 1970s, but poker didn’t get the thumbs up from lawmakers until the summer of 1993.

Arguably one of the most iconic casinos in the world, let alone the USA, the Bellagio is home to the infamous Bobby’s Room. Synonymous with high stakes gambling and the poker top pros, this intimate alcove is the proverbial jewel in the Bellagio’s crown.

Home to the likes of Doyle Brunson, Phil Ivey, Daniel Negreanu and Gus Hansen on a daily basis, Bobby’s Room has seen some of the biggest poker games in the world over the last 20 years. From million dollar bluffs to prop bets involving male breast implants, this exclusive section of the Bellagio’s poker room has given rise to a slew of legendary tales.

Unfortunately, unless you’re super talented or super rich you’ll probably never get to ante-up inside Bobby’s Room. However, that doesn’t mean the Bellagio isn’t a top US poker room. In fact, it’s because of Bobby’s Room that the venue is loved by grinders from all over the world. While you may need a few million dollars in your bankroll in order to get into the casino’s richest game, there are hundreds of smaller games on offer each week filled with players aiming for the top.

The presence of the most exclusive live poker game in America is enough to pull people into the casino and give them something to aim for. This means that you’ll often find a string of low stakes games filled with weak players. Blinded by the dream of running a bluff against Doyle Brunson, these fishy players are commonplace inside the Bellagio and always ripe for picking.

In fact, aside from being known as one of the top live USA poker rooms, the Bellagio is known as one of the softest. Of course, when you move up to the higher limits you’ll find yourself amongst a host of top players, but below the top-tier it’s generally the case that the games are easy. In general, you’ll find that cash games start from $1/$2 and run as high as $1,000/$2,000 during the World Series of Poker. At high limits it’s possible to find Mixed Games, but in general you’ll find that Texas Hold’em and Pot Limit Omaha will be on offer.

Borgata Casino: Best Poker room on the east coast. See 2,465 traveler reviews, 264 candid photos, and great deals for Atlantic City, NJ, at Tripadvisor. Our Three Card Poker and Ultimate Texas Hold’em table games are a sure bet for fast, fun excitement! Whether you’re an experienced poker player, a newcomer or somewhere in between, these table games are easy for anyone to learn, play and win! Start playing now in the Poker Room! The 85-table poker room at the Borgata in Atlantic City’s Marina District is the premier poker destination on the East Coast. It is more than double the size of any AC competitor and offers the largest variety of cash games, tournaments, and poker promotions around.

Another top live USA poker room outside of Nevada, Foxwoods is another structural behemoth in the gaming world. Offering 300,000 square feet of floor space, the venue has everything the hopeful gambler could wish for.

Contained with the six interconnected casinos is every class game you could wish for. From blackjack and roulette, to craps and slot machines, the adrenaline junkies among you will have plenty of opportunities to swing the pendulum of luck when you enter Foxwoods Casino.

However, if the virtues of skill and logic are more to your liking, then Foxwoods poker room will, provide an oasis of tranquility amid the chaos of the six gaming floors. Boasting 125 poker tables and the honor of being the second largest poker room in the world (not just the US); this venue is one that literally offers something for everyone.

Regardless of what your poker persuasion is, Foxwoods will have something to tickle your fancy. Of course, Hold’em and Omaha are by far the most populous games on the menu and you can enjoy each at limits ranging from $1/$2 to $100/$200. However, if you’re looking for something a little different, then Foxwoods is one of the few live US poker rooms that offers 7-card stud cash games. Running regularly throughout the week (mainly because of the venue’s high volume of players), fans of non-Hold’em poker games can grind out a fortune at limits ranging from $1/$3 and $75/150.

For those that enjoy the rush of a good tournament, Foxwoods plays host to a busy schedule of daily tournaments with prizepools the regularly top five-figures. However, it’s when the Foxwoods Poker Classic gets underway that this live USA poker room comes into its own. Regularly welcoming the best players in the world, the event is a major fixture on the US poker calendar for thousands of players.

In America, bigger is always better and there are a few live poker rooms in the country that can stack up to the Commerce Casino. Situated in the Los Angeles suburb of Commerce, this casino offers a poker room that can hold up to 200 tables at once.

Although the Commerce poker room doesn’t sit pride of place on the Las Vegas strip, the stature of this venue is no less impressive. Owing to the sheer size of this US poker room, players from across the country are able to enjoy cash games and tournaments of all sizes. Unlike many of the top live poker rooms in the USA, The Commerce doesn’t only cater to high rollers. While venues such as the Bellagio have based their reputation around the wealthy games they host, The Commerce has a much more inclusive policy.

Average cash games limits will start as low as $1/$2 and reach as high as $100/$200+. In fact, if there are a number of celebrities in town, something that often happens at the Commerce, the highest games on offer can run a stakes exceeding $200/$400.

Aside from offering a variety of Hold’em, Omaha, Stud and Mixed cash games, The Commerce also offers a range of poker tournaments. Although the daily and weekly schedule isn’t anything to get too excited about, the casino comes into its own when it hosts the L.A. Poker Classic. Part of the ever-popular WPT season, the event is extremely popular and regularly produced prizepools exceeding $5 million.

If playing poker isn’t enough, then The Commerce Casino is also a complete entertainment complex. Mimicking the services found at some of the top venues in Las Vegas, The Commerce has six restaurants, a sprawling hotel complex as well as numerous bar and leisure facilities.

The Borgata Hotel Casino and Spa

Over the last few years the Borgata Hotel Casino and Spa has become one of the top live poker rooms in the US. Located in Atlantic City, New Jersey, and now the owner of an online platform, the Borgata has benefited from the recent changes in US poker legislation.

Being situated inside one of the states that offer legal US online poker, this venue is now being utilized by many of the world’s top poker tours, including the WPT. In fact, in 2013 and 2014 the casino wrestled the WPT World Championship event away from its traditional home inside the Bellagio. Such a move was not only seen as a sign of the times, but as a testament to the Borgata’s prowess as a top US venue.

One of the main selling points for the Borgata, aside from it being the home to some of the WPT’s top tournaments, is that it’s the largest hotel in New Jersey. Boasting 2,002 rooms, the venue is not only a giant when it comes gambling, but in terms of leisure and entertainment. However, we digress. When it comes to poker, the Borgata is equipped with 161,000 square feet of gaming space that encompasses 4,000 slots and 200 table games. 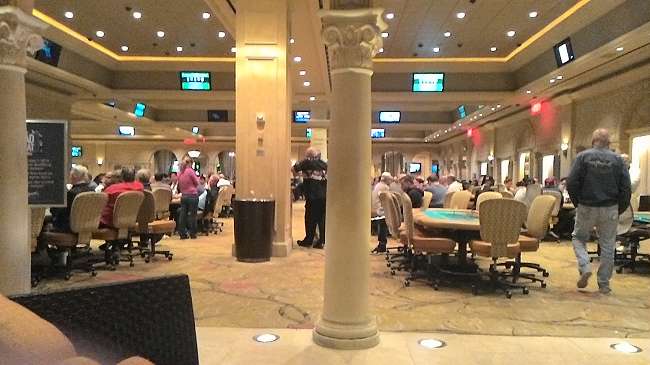 Alongside these options stands a poker room that can accommodate around 100 tables at once. Generally filled with a mixture of tournament players and cash game grinders, it’s the latter demographic that really benefit from the Borgata’s size and experience. In the tournament world more players equates to bigger prizepools and those that choose to ante-up inside this venue will always be in good company. In fact, such is the pedigree of this live US poker room that the WPT now hosts not one, but three major MTTs inside its walls. 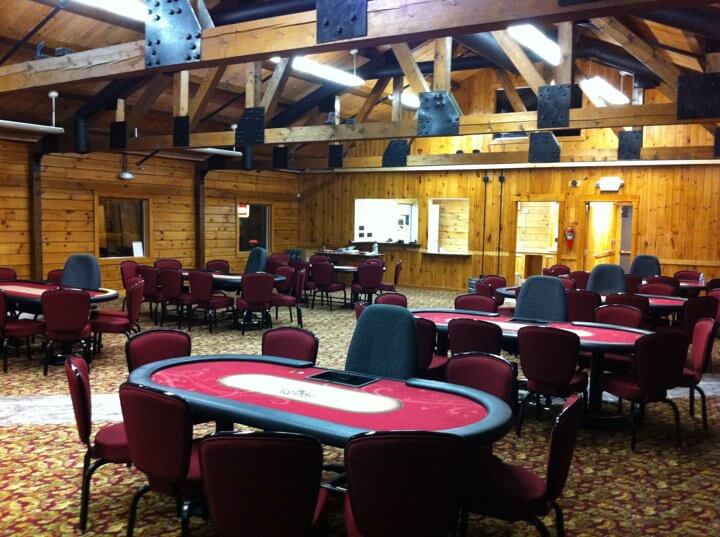 It may not be the biggest live poker room in the USA, it might not be the most impressive, but Binion’s Horseshoe is undoubtedly one of the top US poker rooms. In historical terms, Binion’s is an industry icon as it was home to the original World Series of Poker. Providing the venue where the likes of Doyle Brunson, Chip Reese and Benny Binion decided who the best player in the world was, Binion’s has since gone on to host Poker’s Hall of Fame.

In today’s terms the casino’s ten poker tables and $4 rake on all cash games is a million miles from facilities offered by our other top USA live poker rooms. However, what it lacks in size it certainly makes up for in nostalgia. Anyone who takes the time to visit downtown Las Vegas and ante-up inside Binion’s poker room will feel a sense of reverence. Knowing that the venue is the birthplace of modern poker tournaments and once played host to the greatest grinders in history is something that can’t be ignored. On top of that the intimate setting makes each game more personal and the level of service that much better.

Of course, on a good day you’ll probably only find a handful of cash games on offer with stakes no higher than $10/$20. However, in reality, none of that really matters because it’s a poker room that every poker player in America should have the pleasure of playing in.