Poker Hand Rankings - Texas Holdem Starting Hands Chart At the bottom of this page is a comprehensive listing of Texas Hold'em starting hands based on their EV (expected value). Expected value is the average number of big blinds this hand will make or lose. Furthermore, the rankings are standard for all the most popular types of poker games including No-Limit Hold’em, Pot-Limit Omaha and Seven-Card Stud. In addition to a poker hand rankings chart, also provided are answers to some of the most frequently asked questions regarding poker hand rankings, as well as the game of poker in general.

This table comes from the book Hold 'em Poker for Advanced Players by David Sklansky and Mason Malmuth.

This is a strategy book for limit Hold'em, but the starting hand groups do have some practical use in no limit Hold'em.

What is the Sklansky and Malmuth starting hands table?

The table is a general ranking of hands in Texas Hold'em.

The Sklansky and Malmuth starting hands table groups together certain hands in Texas Hold'em based on their strength. Starting with the strongest set of hands that you can be dealt in group 1, the hands get progressively weaker working down the table until the virtually unplayable hands in group 9.

The rough idea is that a hand in one group has roughly the same value and can be played the same way preflop as any other hand in that group.

How to use the starting hands table. 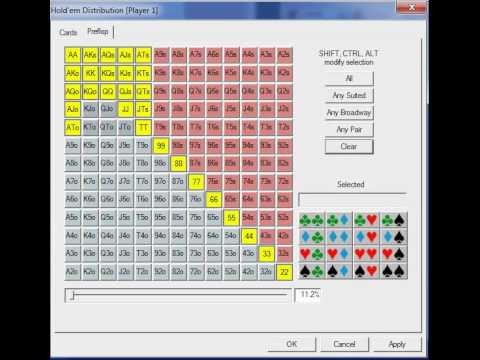 So really there is not a lot to take away from this table from a purely strategic perspective. Nonetheless it's interesting to see how specific starting hands compare to one another based on their preflop value.

If you're really after a starting hand strategy guideline, try the Chen Formula.

Although it's a very popular hand group rankings table, it's not going to do you too much good to learn the whole thing off by heart. In my opinion, the real value of this table is being able to see how different starting hands can be grouped together and ranked based on their value before the flop.

For other useful charts and tables, see the odds charts page from the Texas Hold'em tools section.

Ranking Of All Starting Poker Hands

Go back to the awesome Texas Hold'em Strategy.