Contemporary use of the word slat would include the vertical parts of window blinds, which pretty well describes the ideology of the words adoption into aviation terminology, as a leading edge high lift device with a slot behind it: Wikipedia: High lift devices, slats and slots. The Krueger flaps, when deployed, do not form a slot behind them. Leading edge slats and slots are mounted on the top of the wings' leading edge and while they may be either fixed or retractable, when deployed they provide a slot or gap under the slat to force air against the top of the wing, which is absent on a Krueger flap. They offer excellent lift and enhance controllability at low speeds.

High lift devices are movable surfaces or stationary components that are designed to increase lift during some phases or conditions of flight. It is most frequently utilised during takeoff and initial climb and the approach and landing phases of flight, but may also be used in any other low speed situation. They accomplish this by increasing both the surface area and the camber of the wing. The leading edge of the airfoil can also be equipped with high lift devices.

Leading edge devices are great instruments to increase the critical angle of attack and, therefore, delay the stall.
In aerodynamics, everything comes with a penalty. In a high lift device's case, it's induced drag, capping your airplane's cruise speed and efficiency. That is why on modern aircraft it is only used during certain phases of flight.

Fixed slots direct airflow to the upper wing surface and delay airflow separation at higher angles of attack. The slot does not increase the wing camber, but allows a higher maximum lift because the stall is delayed until the wing reaches a greater angle of attack.

A good example of an aircraft which uses fixed slots is the Zenith CH750, light utility airplane.

Movable slats consist of leading edge segments that move on tracks. It can be either automatic, or powered and controlled by a pilot.

They appear on many large aircraft and provide the same benefits as an automatic slat. However, they are electrically or hydraulically powered - increasing reliability. The flight crew sets the slat position via cockpit controls.

For example, this is how powered slats look like on a Boeing 737.

The best modern example of cuffs is used on the Cirrus SR-20/22.

With advent of latest manufacturing processes in aviation industry, ways toimprove the aerodynamic performance of aircraft wings have been researched by several companies in aviation and defence industry. These new design and manufacturing techniques help to enhance the aerodynamic behaviour of aircraft wings at high or very high Reynolds number which typically conform to the cruising altitudes of aircrafts as well as during landing and take-off stages. The slat and flap devices usually serve as extensions to main aerofoil element of an aircraft wing and intended to divert the turbulent flow along the chord length and improve the maximum lift coefficient by 40-60%. More so than before, these methods have also aimed to achieve improved fuel efficiency by up to 10-13% by drag reduction. With a net change of 24% in fuel prices in aviation turbine fuel seen over the last decade, the future of commercial aviation will continue to look for advanced technologies in design of aircraft wings that are promised to provide safe and reliable air transportation.

Slats and flaps are high lift devices, intended to produce maximum lift coefficients on aerodynamically designed wings of aircraft. The use of aerodynamic extensions are done in order to increase the effective plan form area of wing thereby generating extra lift force required for an aircraft wing. A typical passenger aircraft has three stages in a flight during which the high lift devices are deployed and retracted when required. From Figure 1A, there are seven types of extensions. The first one known as plain flap is attached to trailing edge; second one is slotted flap and has cove in the aft region of main element. A split flap is integrated into the main element and activated by means of a lever near the trailing edge. A zap flap is similar to a split flap but operates using a hinged kinematic mechanism present at the main element along with a crank and lever actuator to retract and deploy when required. The most frequently used flap in aircraft is Fowler flap which forms a unique combination with main element, since it operates using a servo mechanism with a transverse beam support along the wing span. Hence to increase the lift coefficient, the no of slots can be added in order two or three and arranged in tandem at the trailing edge of aerofoil. This is done to augment maximum lift coefficient at a given angle of attack and to enable the lateral stability of aircraft during rolling manoeuvre.1

Figure 1B shows the arrangement of high lift devices on the main wing during take-off and landing stages. Figure 1C depicts the leading edge nose profile of a real wing mounted with slat and supported using a servo hinge for deployment. Figure 1D illustrates the fowler flap devices of a Boeing 747-400 deployed during landing. Figure 2A&2B depicts the innovation cycle of aircraft wing design evolution over time.

Figure 2 (A) Roadmap for innovation cycle (adapted from)4 (B) Illustration of aircraft wing innovations.

The aircraft wing experiences a turbulent boundary layer flow over its surface, caused due to velocity or pressure fluctuations and responsible for generation of lift. The amount of lift produced varies with geometry parameters of aerofoil and depend on three key variables viz. gap distance,2 overhang length and deflection angle3 of flap and slat devices integrated to main aerofoil. The deployment of flap and slat configurations to main aerofoil is done for the take-off stage partially since velocity of aircraft is low. The high lift and low drag action produced as result also helps to increase the pay load capacity or take-off weight of an aircraft. For smooth landing conditions the aircraft must again slow before the touch down on runway for which the trailing edge flap devices are deployed to produce high lift and high drag on wing surface. This arrangement also allows the pilot to have a better visibility through nose up or nose down attitude of aircraft. The slat and flap combination produces a mechanism which effectively increases the camber and total wing area distributed along wing span. From Figure 3A slat contribution to lift augmentation at a given angle of attack is significant and increases the maximum CL or L/D ratio by 10-15%. Presence of leading edge slat delays the boundary layer flow separation and stall over main aerofoil. Further, it improves the flow control by proper mixing of mass, increase the momentum of air stream and also reduce the flow induced noise. Figure 3B shows the sectional lift coefficient comparison for plain and slotted wings. The maximum CL of 3 is obtained for wing using a fowler flap with ~35% improvement.

The maximum CL obtained will also vary after long operational hours of aircraft when surface smoothness deteriorates and impacts the boundary layer transitions on wing. The take-off or landing speeds for aircraft vary between 240 -300 km/h and a function of acceleration distance on ground, climb rates with a slope angles between 20 and 30. The thrust to weight ratio, span wise wing loading, maximum lift coefficient, pressure and friction drag from ground rolling are other factors which affect the take-off attitude of aircraft4 In contrast the landing performance depend on additional parameter known as the approach angle. The structural load on wing during landing is kept low while it is high in cruise conditions of aircraft. Empirical studies have found that pay load capacity increase roughly an order of 15 – 20 % with a change of 3% in maximum CL or glide ratio of a wing. The design process of such wings involve advanced tools like 2D and 3D CFD flow solvers to resolve the complex boundary layer flow physics. Figure 4 shows the common types of trailing edge extensions used in Boeing, Douglas and Airbus aircraft. It can be noted that no of trailing edge slots to generate maximum lift vary with aircraft manufacturer and flight range. 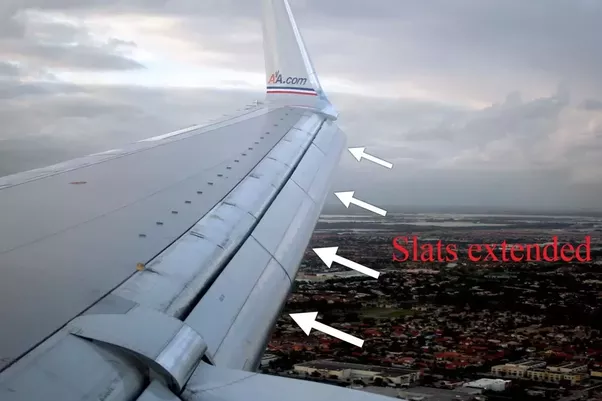 The maximum no of passengers in Boeing B-7xx series allows a gross tonnage of 560-600 tons and take--off payload between 60-80 tons. Figure 5A shows the geometry of 30P- 30N and general aviation multi-element aerofoils.Figure 5B illustrates the pressure coefficient distribution at 60 AOA computed for Mach number of 0.1 The lift produced on wing is affected by angle of attack distribution along the wing span. The gradient pressure recovery along the wing chord during ascent and descent conditions also serve to reduce aerodynamic pressure drag and allow the smoother air flow control over the wing surface. By reducing drag, the reduction in fuel consumption is achieved by average of 5% during such flight conditions.5

Innovations in commercial passenger aircraft design are associated with application of interdisciplinary research in aerodynamic design methodologies, materials technology. Aerodynamics of morphed wing structures made from novel materials is giant step in improvement of the aircraft flight characteristics and provides impetus in aviation industry.

The authors declare that there is no conflict of interest.

©2019 BhargavaV.. This is an open access article distributed under the terms of the Creative Commons Attribution License, which permits unrestricted use, distribution, and build upon your work non-commercially.